According to US News & World Report, Morenci School District in southern Michigan closed schools for a long weekend because an infestation of a “few” bugs was discovered at the high school earlier in the week. All of us at GreenTech Heat applauds the district’s prompt action. We wish everyone would take action against a bed bug infestation as quickly.

According to the article published on the news site, the district treated the schools with a rubbing alcohol spray, and followed this up with a bed bug dog sweep.

US News & World Report failed to disclose the district heat treated the affected classrooms, as outlined on a letter to parents dated February 3, 2020 and posted on the district website. This lack of complete reporting gives the impression that an alcohol treatment is the proper protocol for treating a bed bug infestation.

The article fails to mention that rubbing alcohol is flammable and improper application can cause destruction of property, displacement of families, personal injury, and death. We have repeatedly warned of the dangers of treating with flammable liquids! My first blog on this site was about structure fires caused by people self-treating for bed bugs with rubbing alcohol:

In December of 2017, a woman near Cincinnati, Ohio accidentally set fire to a multi-family home while trying to rid her infestation of bedbugs with rubbing alcohol. Three people were taken to a hospital and ten were displaced from the residence. Just around Thanksgiving, a 13-year-old boy trying to kill a bed bug with alcohol and a match sparked a blaze that was responsible for setting an apartment complex on fire that displaced eight people and caused $300,000 in damage.

Rubbing alcohol is highly flammable. The fact that US News & World Report published an article legitimizing rubbing alcohol as the treatment for bed bugs is disturbing and will reinforce it as a disastrous DIY treatment. According to a 2013 report in Science News, rubbing alcohol only kills about half of the bed bugs when sprayed directly on them.

I would not be surprised if the Morenci School District experiences another school closure in a week to ten days as viable eggs hatch and repeat the bed bug cycle.

If you find yourself in a similar situation, trust GreenTech Heat technology to kill all your insect pests. Do it right and do it safely the first time. Regardless of whether you self-treat with heat, or contract a heat professional, heat safely kills all insect pests and their eggs in a single one-day treatment. Call us at 888-699-3944 to get started with heat today.

GreenTech Heat designs, manufactures, and sells portable electric and propane heaters, fans, and treatment accessories specifically designed for the efficient killing of all insect pests, especially bed bugs and their eggs. In some cases, owning our equipment has a lower total cost and greater timeliness than utilizing an outside service. 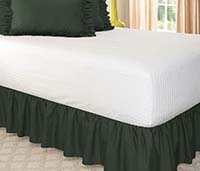 Dust ruffles on beds can obstruct treatment airflow under and around a box spring and mattress, potentially limiting the furniture’s exposure to heated air and extending treatment times. Lift and secure the dust ruffle to allow heated air to flow all around the bed.

The university management is quite happy with the heaters and your efforts to assist were required and we are looking for a long-term relationship.

Pharmaceutical cannabis processors, chicken rendering plants, and pet food manufacturers sanitize their equipment and processing lines with heat which improves the overall quality of their products by limiting exposure to lethal chemicals. Our equipment will kill bugs and black widows with thermal remediation.