This post is a more technical and in-depth follow-up to Eliminate all sorts of odors with heat and focuses on the ability of GreenTech Heat to eliminate the source of odors at a crime scene without dangerous or toxic chemicals such as bleach, hydrogen peroxide, or industrial-strength deodorizers.

The GreenTech Heat thermal pest eradication process was applied to disinfect a postmortem bacterial contamination in June of 1999. Precision Environmental heat treated a Costa Mesa, California condo where the owner had died and the body had remained in situ for 25 days. On top of the biological island created by the decaying body, the owner had been a hoarder in life.

Bacterial samples were taken before and after heat treatment. I’ve included the bulk viable microbiological analysis report below. 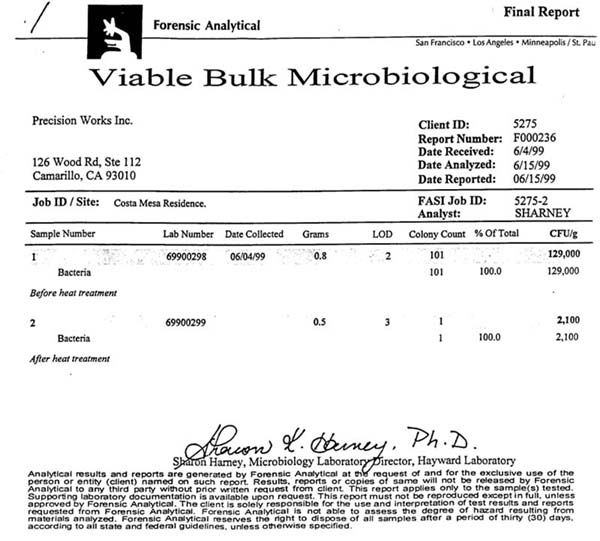 The smell produced by a decaying body is one of the most repulsive odors we can encounter. The GreenTech Heat process killed nearly all the bacteria (both odor-generating and scent-neutral bacteria) which would have prevented future odors from forming. The convected heat from a portable Titan direct fired heater penetrated all surfaces and furnishings at the scene which both denatured the odiferous molecules and caused the surfaces they had impregnated to offgas. Flushing the condo with two-day’s of 5,000 cfm of heated airflow generated by our Titan heater drove odiferous compounds from the structure and replaced the air within the condo many times.

My son took an in-depth series of forensic science courses last year. He read this blog over my shoulder (he’s 6'4"!) and was amazed with what our technology can do. He was intimately associated with the smells of death after these hands-on classes. “Unless I soaked my lab coat in bleach it continued to smell of decay.” He commented that most crime scenes need to be structurally remediated— where contaminated materials are cut out and removed— or treated with copious amounts of bleach or hydrogen peroxide followed up with ozone. “Your bed bug heaters will do that?!”

We developed the GreenTech Heat technology to be efficacious against all forms of insect pests. Dr. Mike’s statement that “every living organism has a thermal death point” applies to every living organism— insects, as well as bacteria. Give us a call. We are ready to help or consult with any unique applications.

We will match any competitor’s price on comparable equipment. Shipping is included on all electric bed bug heater packages to the Contiguous USA. 24/7 technical support. All our heaters and fans have a 2-year warranty. We want you as a customer for life!

It is very refreshing to be able to have a discussion on a topic with the person who literally wrote the book on said topic. Thanks for everything you add to our industry; your work and knowledge is appreciated by even those who aren’t aware of it.

Bed bug lawsuits, settlements, and judgements are becoming more common for many industries. Both responsive and prophylactic heat treatments can go a long way to demonstrate that building owners care about the well-being of their tenants, residents, and guests. Our equipment will kill bugs and black widows with thermal remediation.