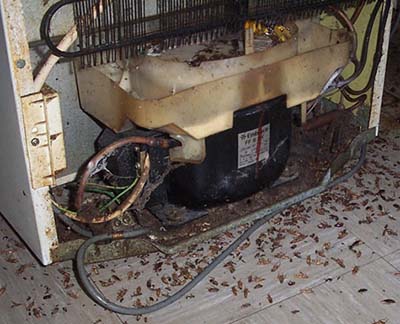 As we continue the developmental history of the GreenTech Heat insect eradication technology, here is a case study of heat’s efficacy against cockroaches. While the story dates from nearly 30 years ago, the application still finds efficacy today.

In January of 1990, the Health Department advised Fat Freddy’s restaurant in Irvine California that they were going to be closed down due to an excessive roach infestation. The restaurants’ management frantically called Dr. Linford’s offices on their third warning. The health inspector warned that she would return in two days for a final inspection and a subsequent closure of the facility. The restaurant had heard about the thermal pest eradication process through various media.

Dr. Linford saw an opportunity to apply the heat technology in a new environment and his team applied the thermal pest eradication process to the large 90,000 cubic foot, freestanding restaurant.

Treatment commenced at about midnight and ended at about 5:00 a.m. Most of the voids in the building were dusted with boric acid powder, an effective but slow-reacting desiccant. Heaters were turned on and temperatures reached as high as 115°F in the wall voids. At first the treatment was considered a failure because technicians did not achieve lethal 120°F temperatures for 30 to 60 minutes.

A week later the health inspector responsible for inspecting the restaurant called Linford’s offices and asked to know what kind of treatment had been conducted. The health inspector then said that she could not flush out one live roach. She commented that roaches had been dying for the first three or four days and then she found nothing alive after that time.

Linford discussed the information with his research team. They theorized that albeit high but non-lethal levels of heat had synergized with the boric acid dust to produce a relatively rapid kill. Boric acid should normally take 8-12 weeks before drawing sufficient fluids through the roach’s exoskeleton to achieve lethality.

Linford then called Dr. Watler Ebeling and discussed the treatment and results. Ebeling agreed with Linford’s finding and hypothesis. Based on the input, Linford and his team gave to Ebeling, tests were conducted that corroborated the synergism phenomenon.

Linford filed for a patent that combined the heat process at non-lethal heat levels with mineral, specifically boric acid dust, to achieve a synergistic result and an effective eradication of free moving insects (cockroaches in this case) in wall voids, cracks, crevices, etc. The U. S. Patent Office granted the patent in September of 1990. This patent differed from the existing heat patents in that elevated but non-lethal temperatures can and do synergize with a slow-reacting desiccant to produce a relatively rapid kill. The dust also provided a residual treatment for roaches that would be brought into the restaurant through contaminated produce. This was the first treatment for free-living, general pests rather than insects found within the wood.

Dr. Phil Koehler of the University of Florida conducted experiments in 2011 on combining heat and chemicals. He determined that synergistic heat activated the chemicals and improved mortality rates when the chemicals were applied prior to heating. Pesticides generally do not degrade until temperatures reach 300°C/572°F.

We developed the GreenTech Heat technology to be efficacious against all forms of insect pests. Give us a call at 888-699-3944. We are ready to help or consult with any unique applications.

Bedbugs can use the utility cart to hitchhike between rooms in a hotel or motel. When treating a room, place the utility cart and vacuum in the treatment area and use a probe to measure the temperature at the hardest-to-heat area.

Your competitor’s propane heater is a little bit cheaper but not as powerful. We’ve sent it back to them for a bad burner ring, which cost us over $2 grand of damage to a home. It’s been a constant thorn in our side. It just sits in the shop now. Nothing but GreenTech going forward. We love our Titans and ePros. U guys are awesome!

Pharmaceutical cannabis processors, chicken rendering plants, and pet food manufacturers sanitize their equipment and processing lines with heat which improves the overall quality of their products by limiting exposure to lethal chemicals. Our equipment will kill bugs and black widows with thermal remediation.