Heat is lethal to bed bugs

When left to traditional pesticidal treatments, hotels, motels, hospitals, retirement homes, airplanes, restaurants, and multiple family units face significant problems from bed bugs. Potential liability is a major concern. Guests and occupants repeatedly bitten may sue as well, as was the case when a couple on a cruise ship cabin received over 100 blood meal wounds. Extended and unplanned downtime to fumigate an entire structure presents a substantial loss of revenue. The loss of reputation and future business can be an even more costly side effect. 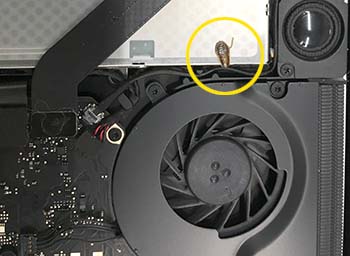 This picture shows a bedbug found inside a laptop computer. bed bugs can be found behind headboards and in phone books inside bed-side cabinets. Even by atomizing pesticides, it is unlikely to penetrate the pages of books in a drawer or tightly fitted on a bookshelf. Desiccant dust is very slow acting and requires a period of two to three months. Traditional treatments allow bed bugs to exist and feed within a given habitation for the entire time. While bed bugs are becoming resistant to some chemical pesticides containing pyrethroids, the insects will never become resistant to heat.

The application of GreenTech Heat is lethal without the application of pesticides. GreenTech Heat can achieve lethal temperatures inside mattresses, pillows, wall voids, books, and all contents within a given habitation. Rooms on several floors can be treated simultaneously within four to eight hours or 12 to 24 hours depending on the type of equipment deployed. The loss of revenue is minimized, or even eliminated, by using GreenTech Heat. The GreenTech Heat portable electric heaters are discreet and will not arouse the same concern from patrons as will pesticides, fumigants, or heating systems that need generators to supply sufficient power to the heaters.

In addition, a GreenTech Heat treatment can aerosolize odors which then can be flushed from the structure and also significantly reduce bacterial and particulate levels. The more traditional use of pesticides could not accomplish either a complete eradication of the target pest or the egg stage of the insect, and certainly will not achieve the additional multiple benefits of improved indoor air quality. 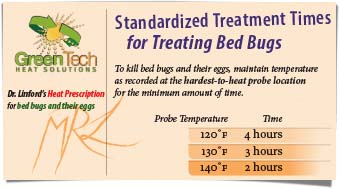 Although the GreenTech Heat technology targets many types of organisms, it is important to understand how the GreenTech Heat process is primarily targeted towards bed bugs. The recommended lethal temperatures as measured by probes and the length of exposure at various temperature levels for bed bugs is presented in Dr. Linford’s heat prescription at the right.

To kill bed bugs and their eggs, maintain temperature as recorded at the hardest-to-heat probe location for the minimum amount of time.

Insects have low temperature tolerances. Drs. Forbes and Ebeling were the first to conduct extensive research on insects and heat. By 1987, the two university professors discovered that insects survive within a comparatively narrow temperature range and rapidly succumb when range limits are exceeded. This is the ecological basis for thermal pest eradication. The table below illustrates the surprisingly low tolerance of insects to heat. The table shows the time required for 100% mortality of four common insect pests at temperatures ranging from 115ºf to 130ºF. The range of temperature tolerances illustrated in the table below has formed the model on which GreenTech Heat is based. Note the reduction in survival time resulting from a mere 5ºF increase in temperature.

Minutes required for 100% mortality of four species of insects at four temperatures. Forbes and Ebeling, 1987.

Unlike drywood termites, cockroaches, ants, and bed bugs are not confined by the materials they infest. When temperatures exceed the range to which these insects are accustomed, the insects attempt to escape the heat by occupying the coolest locations available to them, such as cracks, crevices and wall voids. Controlling insects in a contaminated space is important not just because of the damage they themselves can cause, but also because they serve as vectors for diseases and contaminants. Establishing a perimeter is an important part of an insect eradication strategy.

Dr. Vernard Lewis of UC Berkeley conducted testing on behalf of the State of California for a five year period. These university studies found Dr. Linford’s process to be fully efficacious in the eradication of drywood termites in phase two, and the only primary alternative to structural fumigation. The process is effective in eradicating all metamorphic stages of insects, including egg, larva, pupa, and adult. Dr. Vernard Lewis of UC Berkeley and his research team of Gail Getty and Robin Taylor conducted a field study of the efficacy of the technology using live bed bugs. They found that bed bugs and their eggs were 100% eradicated by the process effectively used by GreenTech Heat.

Bed bugs are small and not that smart. If a bed bug were the size of a person, a typical 400-square-foot room would cover nearly 300,000 square feet—about the size of 6½ football fields! They won’t be able to figure out how to escape the heat before the heat kills them.

Modern bed bug populations are highly resistant to the insecticides used for their control. Because bed bugs are difficult to access and our insecticides do not work as well as we would like, with home owners and pest management. Heat is known to be a very effective bed bug killer and it can be used in many different ways to treat infestations.